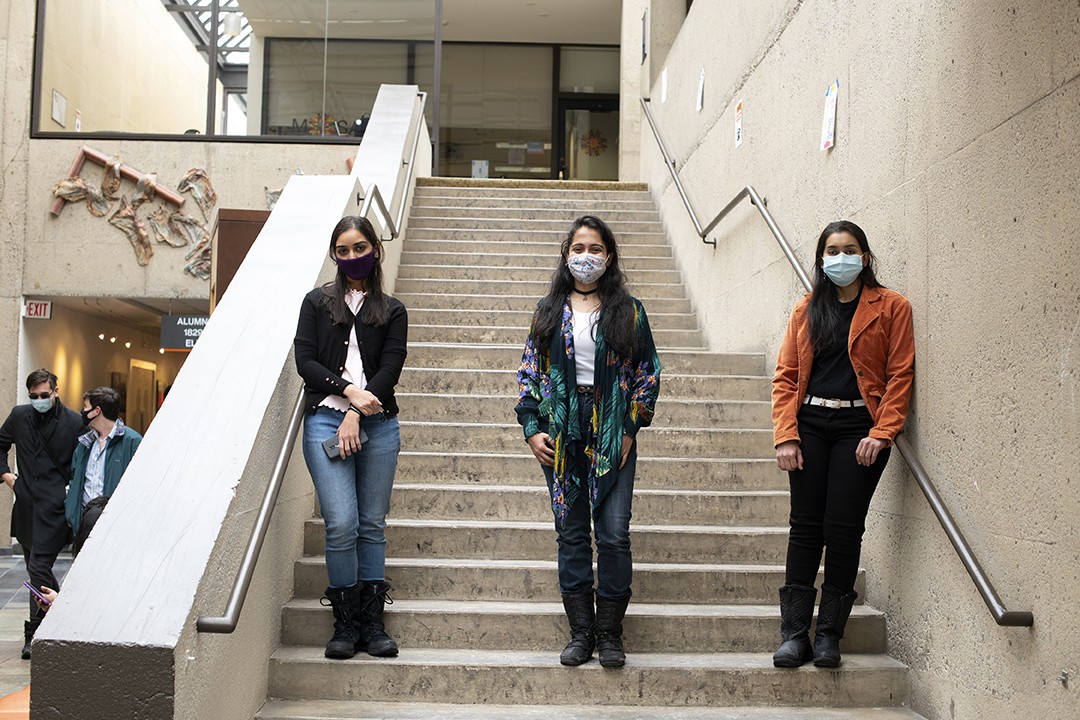 Worldwide RIT scholar will get surprising escort from Chicago

Not every new student traveling to the Rochester Institute of Technology for the first time receives a personal escort on the flight to New York, but that is the result of a pleasant coincidence for Ria Lulla.

Lulla, who had her first semester at RIT online last fall, left her home in India on January 12th to come to Rochester in person for the spring semester, where she is studying a master’s degree in computer science. While she was taking a seat in Chicago on the last leg of her flight, she was assigned to sit next to another young woman who appeared to be a college student. This student helped Lulla put her hand luggage in the overhead bin.

And she was right.

That other student was Nuzhet Ahamed, a Ph.D. Student at RIT who is also a Peer Advisor Leader. As a PAL, Ahamed is assigned 30 international students to help them transition to college and help them settle into the RIT. Ahamed was out with her roommate Anjali Jogeshwar, who was also doing her PhD. Student at RIT and a PAL. Ahamed and Jogeshwar are also from India.

“I had connected with Nuzhet in August,” said Lulla. “She was one of the first people I spoke to about RIT and she introduced me to RIT.”

“That was the fun fact,” said Ahamed. “Little did I know she was coming to Rochester to start the spring semester. It was purely by chance. This has never happened to me before. “

RIT currently has 10 Peer Advisory Leaders, each assigned up to 40 international students. Before the COVID restrictions, they would greet the students with a pizza and networking party. This year they hosted several virtual briefings for new students and provided resources for new students.

“When I first came to the US to create my masters, I remember asking a lot of questions,” said Ahamed. “It was a new experience for me to leave my country. I went through this fear. Every student who came from an international country faced it. My PAL made me feel calm and made the leap of faith to get here. You have been very helpful. “

The PAL program was launched by International Student Services at RIT in the 1980s and often results in lifelong friendships.

Ahamed became PAL in the Fall of 2018 to help other international students like yourself.

“I’ve met students from many different countries, India and China, Nigeria, Malaysia, some from Korea, Pakistan and someone from England,” she said. “His English is just so pleasant to hear. I said, “don’t stop talking!”

Ahamed said most students have questions about housing, curriculum and job search during their freshman semester.

“Some have questions about insurance and others about evidence of vaccinations,” she said. “And some ask questions about Rochester, where to go when they want to exercise, and the fun things to do like the Lilac Festival.”

After landing in Rochester, Ahamed and Lulla went their separate ways to their apartments, where they would stay until they cleared the COVID protocol. Ahamed helped Lulla drive to her apartment before leaving the airport.

“I thought this was a very warm welcome to Rochester,” said Lulla. “We exchanged numbers. I definitely want to keep in touch with her. “