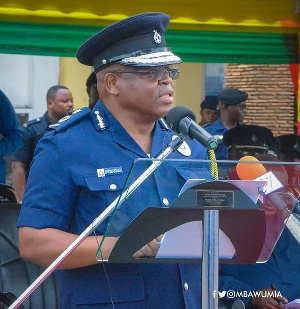 His testimony comes after the IGP threatened to withdraw police escorts if attached armored vans were not made available for carting money.

Nana Yaw Akwada, who responded to this development, told Samuel Eshun on the Happy Morning Show: “The Ghana police should have withdrawn their officers a long time ago. As I speak to you now, there is a district manager somewhere in the north who has withdrawn his men from the bank teller because he does not want to take the risk.

They reported him to the MCE, but this man withdrew his men.

Nana Yaw argued that the police escort’s withdrawal from these vans had become particularly important as some safety concerns had been raised recently.

“Between 2019 and 2020, the use of firearms in the commission of violent crimes rose to 51 percent. The evidence is that a user of a firearm can escape after committing a crime, and I doubt that, as the Ghanaian police force, they would want their men to be at such risk, given the general restrictions within the service on investigations. You don’t want to endanger your men, ”he added.

The IGP published the complaint on the basis of an armed robbery in which a police officer was murdered in cold blood.

A woman in her 30s, who has yet to be identified, was also shot while she was in her shop.

The driver of the Bullion van also suffered gunshot wounds and is currently being treated at the police hospital.