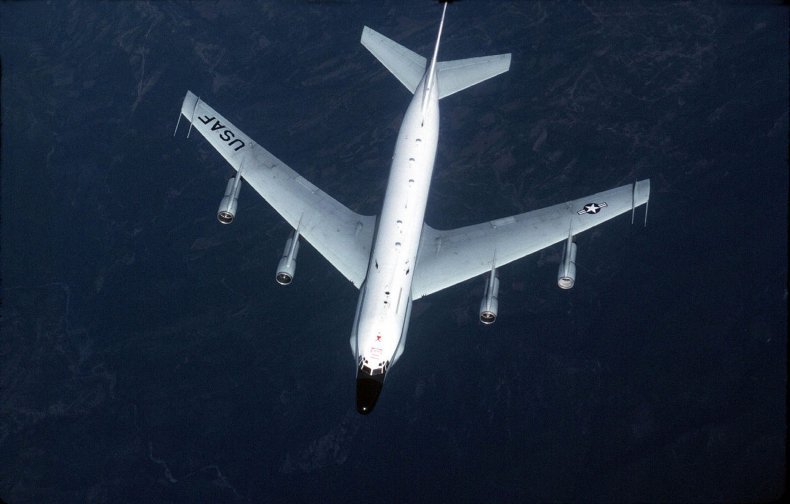 A Russian fighter jet escorted a US military aircraft over Russia’s Far Eastern border this week amid mounting tensions between Moscow and Washington DC and international concerns over military build-up on the border with Ukraine.

The footage released on Friday by the Kremlin’s Department of Defense shows its MiG-31 fighter escorting the US Air Force’s RC-135 strategic reconnaissance aircraft along the southeast coast of Kamchatka, Tass news agency reported.

The ministry said in a statement that its fighter took off from an airfield in the Kamchatka area to identify and escort the US plane.

“The fighter’s crew identified the aerial target as a US Air Force RC-135 strategic reconnaissance aircraft,” said a statement, adding that the American aircraft did not fly into Russian territory.

The MiG-31 escorted the American RC-135 strategic reconnaissance aircraft over the waters of the Pacific Ocean pic.twitter.com/07kh8Zl9kf

“The flight of the Russian fighter was carried out in strict compliance with international rules for the use of airspace,” added the ministry.

In a similar incident last week, a Russian MiG-31 escorted an RC-135 reconnaissance aircraft that Moscow said was approaching its borders in the same region, news outlets reported.

Since last year, NATO planes have stepped up their reconnaissance activities near Russia, warning Moscow that such flights carry the risk of accidental escalation.

On April 7, Russia announced that a Norwegian Air Force Falcon 20 reconnaissance aircraft had been intercepted on the other side of the country over the Barents Sea. The Russian Defense Ministry said its MiG-31 fighter was “jumbled up to identify the aerial target and prevent it from breaching the Russian state border,” Tass reported.

The most recent incident comes as concerns grow in the international community over the buildup of tens of thousands of troops, tanks and artillery by Russia on the Ukrainian border.

In a phone call with his Russian counterpart earlier this week, President Joe Biden urged Vladimir Putin to ease tension. The White House said during the appeal, Biden “emphasized the United States’ unwavering commitment to the sovereignty and territorial integrity of Ukraine”.

Biden has vowed to stand behind Kiev and proposed a meeting with Putin in a third country. The mood for such a discussion is likely to be clouded by the imposition of US sanctions in connection with the SolarWinds cyberattack on US government agencies and allegations of meddling in the 2020 elections. US officials have both accused Moscow, but the Kremlin denies this.