The moment a Turkish Coast Guard ship approaches the Greek ship at speed. Greece accuses Turkey of accompanying a boat full of migrants to Greece on the coast guard ship.

In an apparent escalation of tensions in the Aegean Sea, Greece on Friday accused Turkey of escorting its migrant navy boats into Greek territorial waters and harassing a Greek coast guard ship.

Greece has released photos and videos of the incident, which apparently took place northeast of Lesbos early in the morning.

It appears to be approaching the Greek ship at speed and turning shortly before a collision. However, the Greek officers remain calm as they watch the Turkish ship approach.

Greece says the migrant boats were not allowed to enter the country and were pushed back.

In a statement, the Greek Minister for Migration and Asylum, Notis Mitarachi, said the “multiple incidents” are aimed at “provoking an escalation with Greece”.

Regarding the migrant boats, he said: “There is no doubt that these migrants left the Turkish coasts and were not at risk given that they were supported by Turkey.”

Mitarachi called on Turkey to stop the unjustified provocation, to safely return these migrants to Turkey and to comply with the 2016 joint EU-Turkey declaration on migration. 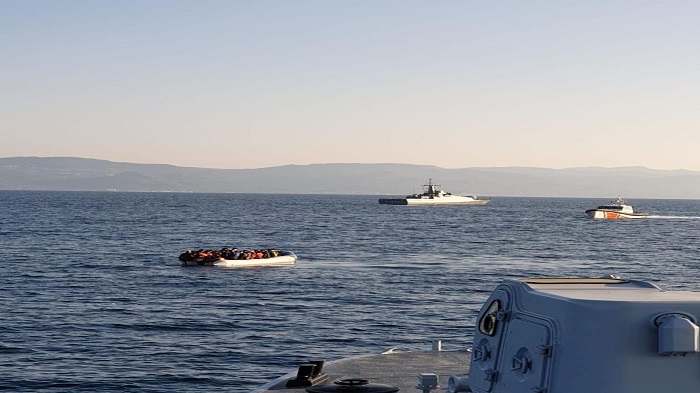 The photo published by the Greek government apparently shows the Turkish Navy leading a migrant boat to Greece.

Greece and the EU call on Turkey to take back migrants

Greece and the EU called on Turkey to take back migrants from the Aegean Islands during a meeting between Prime Minister Kyriakos Mitsotakis and EU Interior Commissioner Ylva Johansson on Tuesday.

They also stressed the need to fully implement the EU-Turkey Joint Declaration of March 18, 2016, according to which Ankara would take back asylum seekers from Greek islands whose applications have been rejected.

“I urge Turkey to resume the return of migrants from Greece as a matter of urgency,” said Johansson during a visit to the island of Lesbos on Monday, where more than 8,000 asylum seekers live.