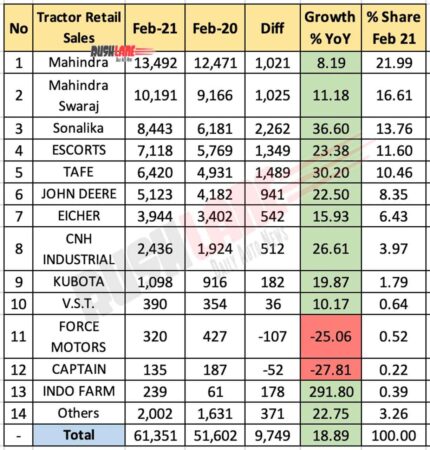 Even as two-wheeler, three-wheeler and commercial vehicle sales declined on February 21, passenger car and tractor sales continued to grow. According to the FADA – Federation of Automobile Dealers Association, sales of two-wheelers fell 16.08 percent, while sales of three-wheelers and CV fell 49.65 percent and 29.53 percent, respectively.

By contrast, tractor sales rose 18.89 percent last month. Sales were 61,351 units compared to 51,602 units sold on February 20. It can be seen from the attached table that every tractor manufacturer except Force Motors and Captain had positive sales.

Mahindra Swaraj’s sales rose 11.18 percent year-over-year to 10,191 units on February 21. This is an increase from 9,166 units sold on February 20th. However, monthly sales were unchanged at 10,211 units sold on Jan. 21. The company plans to introduce a new range of higher and lower horsepower tractors to help smaller farmers run puddles.

Swaraj also recently unveiled the Swaraj 742XT tractor, which was developed exclusively for paddy mechanization and has proven to be powerful and fuel-efficient even on puddle operations.

Sonalika Tractor reported sales of 8,443 units on February 21, up 36.60 percent from 6,181 units sold on February 20. However, month-over-month sales were down 2.36 percent, with 8,647 units sold on Jan. 21. Executive Director Raman Mittal of the Sonalika Group The company achieved 1,06,432 units from March to February, the highest ever cumulative domestic sales of all time, which corresponds to a growth of 35.5 percent compared to the same period last year. He stated that this was the fastest sales of 1 lakh domestic tractors of any tractor brands in the domestic markets. 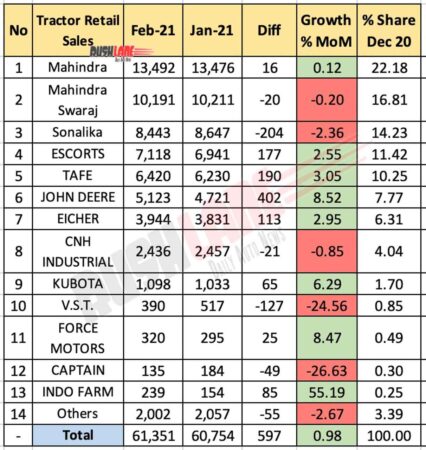 Further down in the order number 5 was TAFE (Tractors and Farm Equipment Ltd). Sales on February 21 were 6,420 units, up 30.20 percent from 4.31 units sold on February 20. The month-on-month sales increase was 2.55 percent with 6,230 units sold on January 21. TAFE also presented a new series of tractors on February 21st. The Dynatrack Series is an advanced line of tractors for agriculture, transportation and commercial applications. It is equipped with VersaTech technology. The series has an extendable wheelbase that is suitable for year-round use.