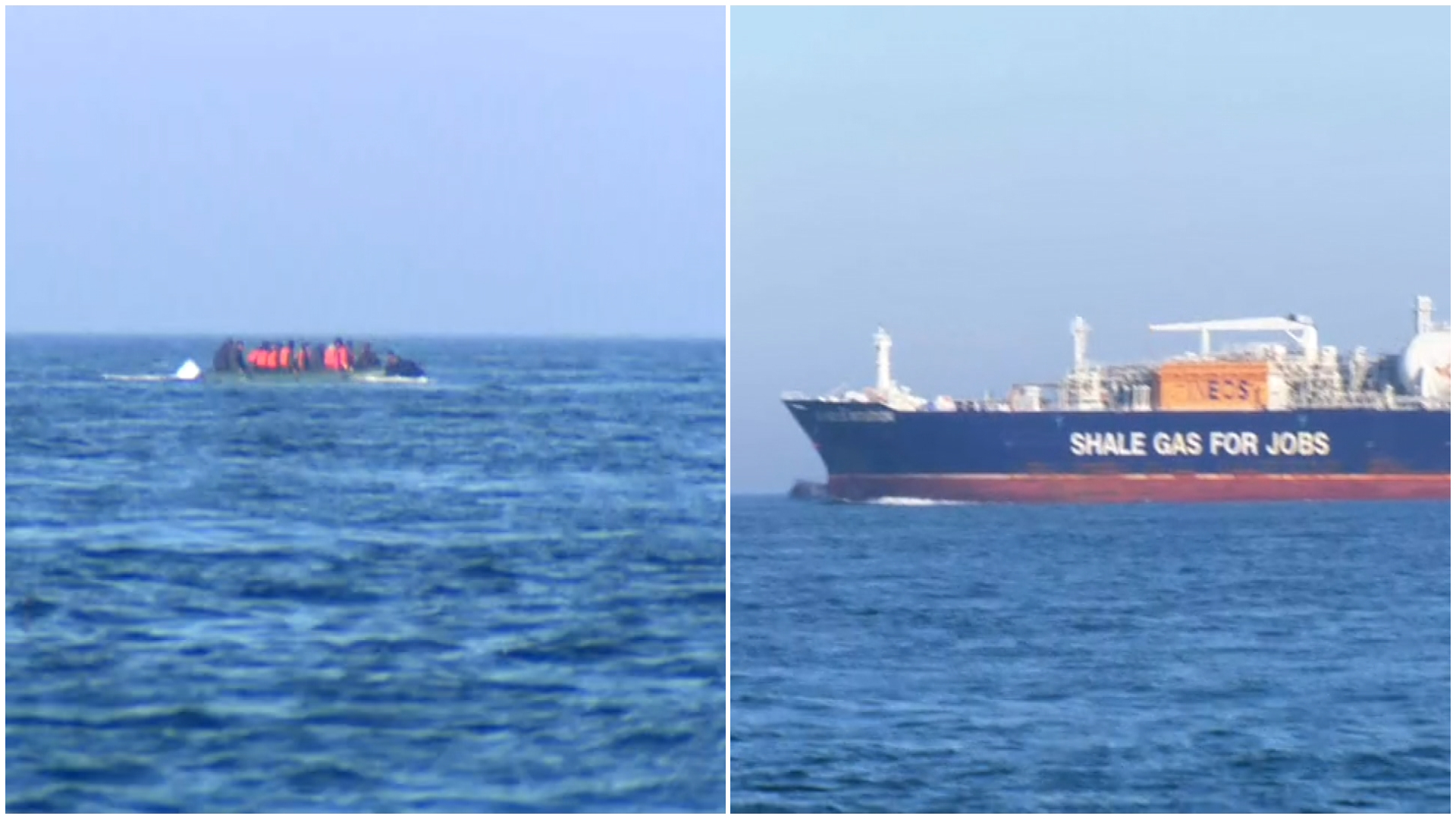 ITV News has the dangers of Migrant Firsthand crossings of the English Channel when a container ship narrowly missed a rubber dinghy full of people after the French handed it over to the British border guards.

ITV News saw a French patrol ship escort a dinghy into British waters with about 18 people on board, but before a British boat could get it to safety, the tiny dinghy was nearly hit by a huge container ship.

Radio transmissions heard by ITV News between the British border force and the captain on an Ineos shale gas ship show the urgency of the situation.

“We left Dover this morning at 4:30 am and we chased a French ship on its way to the British border in the middle of the English Channel.

“And then we saw that there was a migrant dinghy accompanying it to the British border. It was a large dinghy with some of the people on board wearing life jackets, many not all.

“They then reached British waters, where the French ship radioed it to the British border guards. The border guards then came from Dover to take responsibility for the boat.

“In the middle of this handover (between the French and British) the dinghy was still sailing towards Dover, but it was also in the middle of the canal shipping route. There was a large container ship on a direct course towards the dingy.

“Later two more boats were intercepted by the Border Force and we saw them being brought into Dover harbor. They had young children and women on board.”

The Border Force ship can be heard asking the captain, “Do you have a view of the migrant ship on your starboard side, over there?”

He replies, “Yes, that’s right. I see a small object on the starboard side. I don’t know what it is.”

The Border Force says, “This is a migrant ship with people on it, so please avoid action.”

In the background you can hear the captain of the boat on which ITV News was on, saying “too late” as the dinghy disappears from view.

Current French rules mean you can ask a boat if you need help, but if those on board refuse, the French boat cannot attack. While they can escort the boat like on Wednesday to ensure its safety, the migrants remain very vulnerable to incidents as observed by ITV News.

Migrant children are taken away by the authorities. Photo credit: ITV News

France and the UK have promised to step up cooperation on managing small boat crossings.

Speaking on the phone ahead of this week’s G7 summit in Cornwall, Boris Johnson made “the need for increased efforts to deter migrants from this dangerous journey following the worrying increase in incidents in recent weeks”.

A spokesman for Mr Johnson said: “The Prime Minister and President discussed the problem of illegal migration across the English Channel. The Prime Minister noted the ongoing cooperation to manage small boat crossings in the English Channel and stressed the need for increased efforts to discourage migrants from making this dangerous journey following the worrying increase in incidents in recent weeks. “

A child is lifted from the dingy after it arrives at Dover. Photo credit: ITV News

Migrants, as seen on ITV News on Wednesday, usually arrive in Dover, and Kent County Council warned this week that the unaccompanied child migration crisis is once again threatening to overwhelm Kent’s children’s services.

The Kent County Council has threatened legal action against the Home Secretary as the country’s Unaccompanied Child Asylum Seeking Services (UASC) have reached a “breaking point”.

Kent has almost double the number of UASCs in care that the government says are safe, the council said.

The agency said it may be unable to accept new unaccompanied asylum-seeking children (UASC) in a matter of days – a situation that occurred in August 2020.

Charities have urged the Home Office to increase funding for children who come to the UK “completely alone and in great danger”.

The number of people crossing the 21-mile route has almost doubled so far in 2021 compared to the same period in 2020, with more than 3,100 reaching the coast of England by the end of May.

Almost 600 migrants were intercepted this week trying to cross the English Channel in three days.

Kent County Council Chairman Roger Gough said: “The people of Kent deserve a solution to this problem. We still don’t have one. The totally disproportionate burden on Kent’s children’s services continues to be overlooked.

“We need to ensure that all UK local authorities have the capacity to assist these children.”

Interior Minister Priti Patel said earlier this week that her French counterparts “urgently need to do more” to respond to the number of migrants and reduce the likelihood of people trying to cross the English Channel.

French officials say his priority is “the protection of human life and the safety of navigation in the English Channel” but did not comment on the incident that ITV News was watching.

Local government secretary Robert Jenrick told ITV News that the UK government is working with the French authorities to “disrupt this trade”.

“She’s doing an urgent review of some of the scenes we’ve seen over the past few weeks.

“We work very closely with Kent County Council, they have a significant burden from unaccompanied minors and others coming to the UK.

He said the UK government was working with the French authorities to “disrupt this trade”.

ITV News has asked the Home Office to comment on ITV News’ testimony on Wednesday morning.