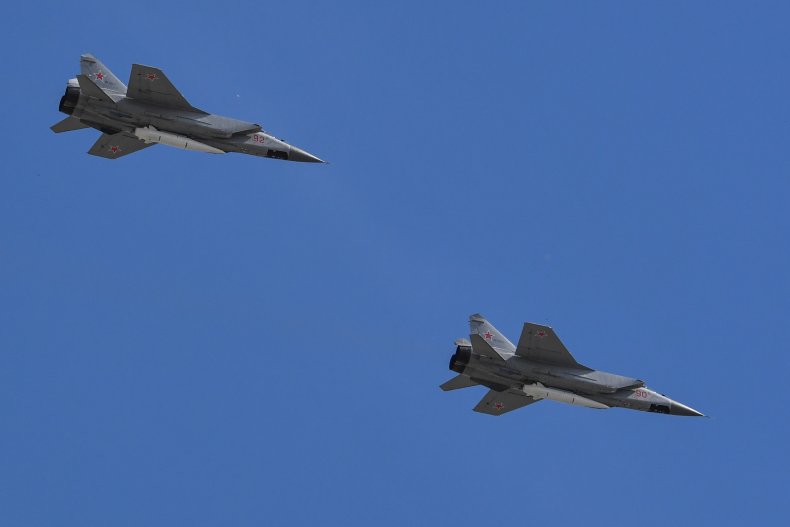 A Russian MiG-31 fighter aircraft was jumbled up to escort a US reconnaissance aircraft over the Pacific Ocean.

The incident follows Russia’s announcement that it would withdraw troops from the Ukrainian border after a military build-up that raised concerns in the international community.

“The Russian fighter’s crew identified the aerial target as a US Air Force RC-135 strategic reconnaissance aircraft and escorted it across the Pacific,” the statement added.

“After the foreign military aircraft turned away from the state border, the Russian fighter returned safely to the base airfield.”

Using typical wording for such statements, it added that “no violations of the Russian state border were allowed” and that the flight of the Russian fighter plane was conducted “in full compliance with international rules for the use of airspace”.

The Russian Defense Ministry tweeted footage showing the Russian fighter escorting the plane in the incident.

The ministry released footage of a similar incident last week when a MiG-31 fighter escorted the same type of American reconnaissance aircraft along the southeast coast of Kamchatka in the far east of the country.

NATO has reported an increase in interceptions of Russian aircraft amid mounting tension and distrust between Moscow, the US and other allies. This week NATO messed up F-16 jets in pursuit of two Russian Tu-160 blackjack bombers escorted across the Baltic Sea by Su-27 and Su-35 fighter jets.

Earlier this month, Moscow said it had messed up a MiG-31 to escort a Norwegian Air Force Falcon 20 reconnaissance aircraft across the Barents Sea.

Moscow has long complained about NATO activities near its border, warning that it could escalate. The increase in interception and escort services by Alliance, US and Russian aircraft is due to an increase in tensions resulting from the build-up of Russian troops on the border with Ukraine.

On Friday, Russia announced that it had begun withdrawing its troops from the Ukrainian border. This was followed by the announcement by Russian Defense Minister Sergei Shoigu that Russian troops “have shown their ability to defend the country”.

However, Ukrainian Foreign Minister Dmytro Kuleba said the withdrawal “would not end either the current escalation or the conflict between Ukraine and Russia in general”.

Russia’s MiG-31 supersonic interceptors fly over Moscow in this illustrative image on May 9, 2018. A MiG-31 escorted a US reconnaissance aircraft over the Pacific on April 23, 2021, agencies reported.
Yuri KADOBNOV / Getty Images

This story has been updated.