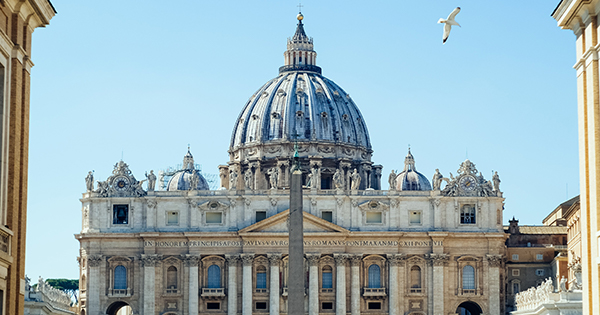 POV: Vatican Choice to Take away Blessings from Identical-Intercourse Unions Demoralizes Many Catholics | BU At the moment

On December 10, 1912, Bishop FN Gasquet introduced Pope Pius X to the Catholic convert and long-time friend Mabel Veronica Batten. Everyone present claimed that she had charmed the Pope with her simple manner, and he affectionately wrote his photo on her: “Alla diletta figlia Veronica” (To the beloved daughter Veronica). At this meeting with the Holy See, Batten was accompanied by another convert named “John”. What makes this meeting special is that ‘John’ is better known in history as Marguerite Radclyffe Hall, who later wrote The Well of Loneliness (1928), a book banned in Britain for its positive portrayal of lesbianism. Hall and Batten were lovers. They demonstrated the flexibility of Catholicism as a space for religious practice and held to and rejected aspects of their beliefs. Her beliefs supported her emotionally, spiritually, and aesthetically. The men of the Church, despite their open and unconventional relationship, found little cause for concern about Batten and Hall. There was a presumed acceptance of their status by the hierarchy, and both women enjoyed their interactions with church authorities.

My own work on queer Catholic women in Britain in the late 19th and early 20th centuries shows that the Church had been much more flexible and welcoming in the past. In the UK, queer women convert to the faith like Mabel Batten, Radclyffe Hall, Michael Field, the Ladies of Llangollen, Christopher St. John, Alice Abadam, Dr. Alice Johnson and Tony Atwood Catholic and strange. Indeed, many believed that Catholicism was a safe place to explore oneself and “otherness”.

But last week that safe space was changed for many LGBTQ + Catholics and allies when the Vatican announced that the Church “cannot bless” same-sex unions. In a church that many say was re-founded and promoted by Pope Francis, this segment of the Church’s believers was suddenly singled out, judged and – although historically worthy of inclusion – viewed as “not worthy of blessing”.

The Vatican Congregation for the Doctrine of the Faith (CDF) surprised many Catholics with its negative response to the dubium (or question) regarding the Apostolic Exhortation Amoris Laetitia (2016): “Does the Church have the power to give? the boon to unions of people of the same sex? “

The CDF argued that the sacrament of marriage is only permissible “between a man and a woman”. The CDF also stated that a union blessing (not marriage) would encourage “sexual activity outside of” [sacramental] Marriage. “Although the document was not signed by Pope Francis, it implicitly offers his approval of what many see as a step backwards from his earlier writing and work on inclusivity for LGBTQ + Catholics. The hardest part of the document that many read could, including myself, the assumption that “God does not and cannot bless sin.” For me and so many who know and love same-sex couples in loving and supportive relationships who imitate and practice the Catholic Faith: How Can there is sin when there is love?

As early as 2013, the Vatican published a document calling on local bishops to rethink the institutionalized understanding of the Catholic family. It resulted in a preparatory document for bishops worldwide on “Pastoral Challenges of the Family in the Context of Evangelization”.

The most striking thing about this report is that it has created parameters for a comprehensive study of the state of Catholicism and families by interviewing the Catholic lay population. So far, the language of this document and the Apostolic Exhortation of Francis Amoris Laetitia (2016) have been widely viewed as tremendous steps towards recognizing marginalized members of the Faith in a dynamic and progressive way. This inward look, however, highlighted the tensions between conservative and liberal groups within the faith. Many Catholics do not seem to have extended their “blessings” to marginalized groups. In my PhD thesis, I provided historical evidence of a more expansive Catholic faith in Britain in the late 19th and early 20th centuries, praising Amoris Laetitia as a reminder of the flexibility I’ve shown in my research. Unfortunately, as the language in the Dubium answer shows, this is not the case everywhere.

For now, same-sex union blessings have been removed from the CDF. However, the CDF took the time to reiterate that homosexuality “must be accepted with respect, compassion and sensitivity. Any sign of unjustified discrimination in their respects should be avoided. “But for many of us, this Dubium response feels a lot like“ unjust discrimination ”. This backtracking by the CDF and then by the Pope (or Hierarchy / CDF) is extremely problematic for those motivated by Catholic Social Doctrine.

Fortunately, some of us advocating a more progressive Catholic faith, a number of religious and lay people have reacted against the Dubium reaction and comment. Father James Martin, SJ, a longtime queer Catholic attorney, has publicly expressed his shock and dismay at the document. This comes after years of Martin provoking the Pope’s desire to be inclusive and not just “tolerant” of LGBTQ + Catholics. Father Kenneth Boller, SJ, wrote to his ward in St. Francis Xavier, New York: “We are deeply saddened and share the pain of the LGBTQ community. We are empowered to live the gospel mandate to welcome all, especially those who like others are referred to as “outsiders” or “others.” “Bishop George Batzing, President of the German Bishops’ Conference, is reportedly dissatisfied with the CDF document. It was discussed that priests in Germany and Austria could continue to bless same-sex unions unchanged. Bishop Johan Bonny of Antwerp has issued a statement that he is “ashamed” and apologized for the document.

In many ways the church is doing what it always has – to make a statement, but also to know that many in the hierarchy will act according to their own consciences in their actions. The Lent timing of the document’s publication feels like a betrayal even during a period of renewal. Today more than ever, the Catholic Church must act compassionately and without apology on questions of sexuality and the role of women in the Church.

For Batten and Hall, Catholicism was among thousands and thousands a “moving home”. Safe haven. Heartbreakingly, it seems that the Catholic Church may not be a definite place for other queer Catholics in the future.

But if the above priests and other lay activists have anything to say on this matter, the final word on blessings is yet to come.

“POV” is an opinion page that contains timely comments from students, faculties, and staff on a variety of topics: on campus, at local, state, national, or international levels. Anyone wishing to submit a piece that should be approximately 700 words long should contact John O’Rourke at orourkej@bu.edu. BU Today reserves the right to reject or edit submissions. Views expressed are those of the author only and are not intended to reflect the views of Boston University.