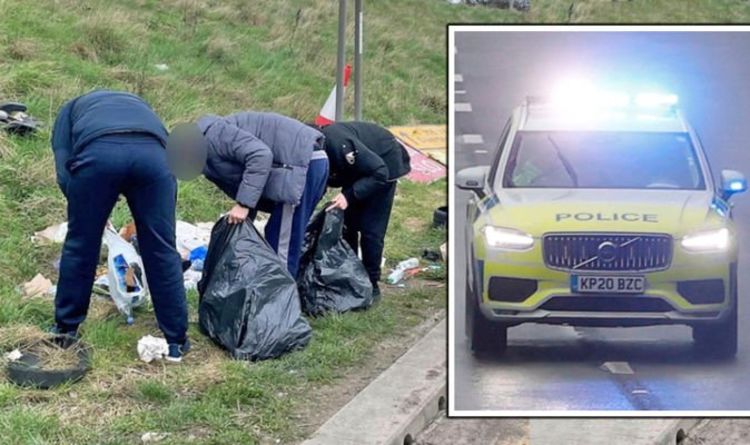 The group of men stopped by the hard shoulder on Sunday and loaded garbage bags out of the trunk of a Volkswagen Passat. However, the men were spotted by CCTV cameramen from Highways England. The site of the landfill was on the M6 ​​motorway between junctions 12 and 13 in Staffordshire.

Central Motorway Police Group (CMPG) officers caught up with the car the men were driving and stopped them.

The group was then taken to the landfill and made to clean up all of the garbage themselves.

Traffic police located the men five miles from the landfill on the highway between Junctions 14 and 15.

The rubbish consisted of numerous sacks that were left on a grass edge between branches 12 and 13.

Officials from the Central Motorway Police Group intercepted the vehicle between intersections 14 and 15 – and took them back to the scene.

Pictures of the dump trucks were then posted on Twitter.

The pictures showed three men bending down to pick up the garbage.

CMPG officials tweeted, “M6 J12 to J13, an eagle-eyed @HighwaysWMIDS who was monitoring the CCTV cameras, noticed the occupants of a Passat garbage in an ERA bay.

ONLY IN: Eurostar warning – Britain must NOT invest, former MPs warn

“Show us their faces next time.”

Another Twitter user, Jim Sanbrooke, replied, “I got everything you deserved.

“I hope you got punished too.”

“Should have got them picking up everyone else’s trash while they were there.”