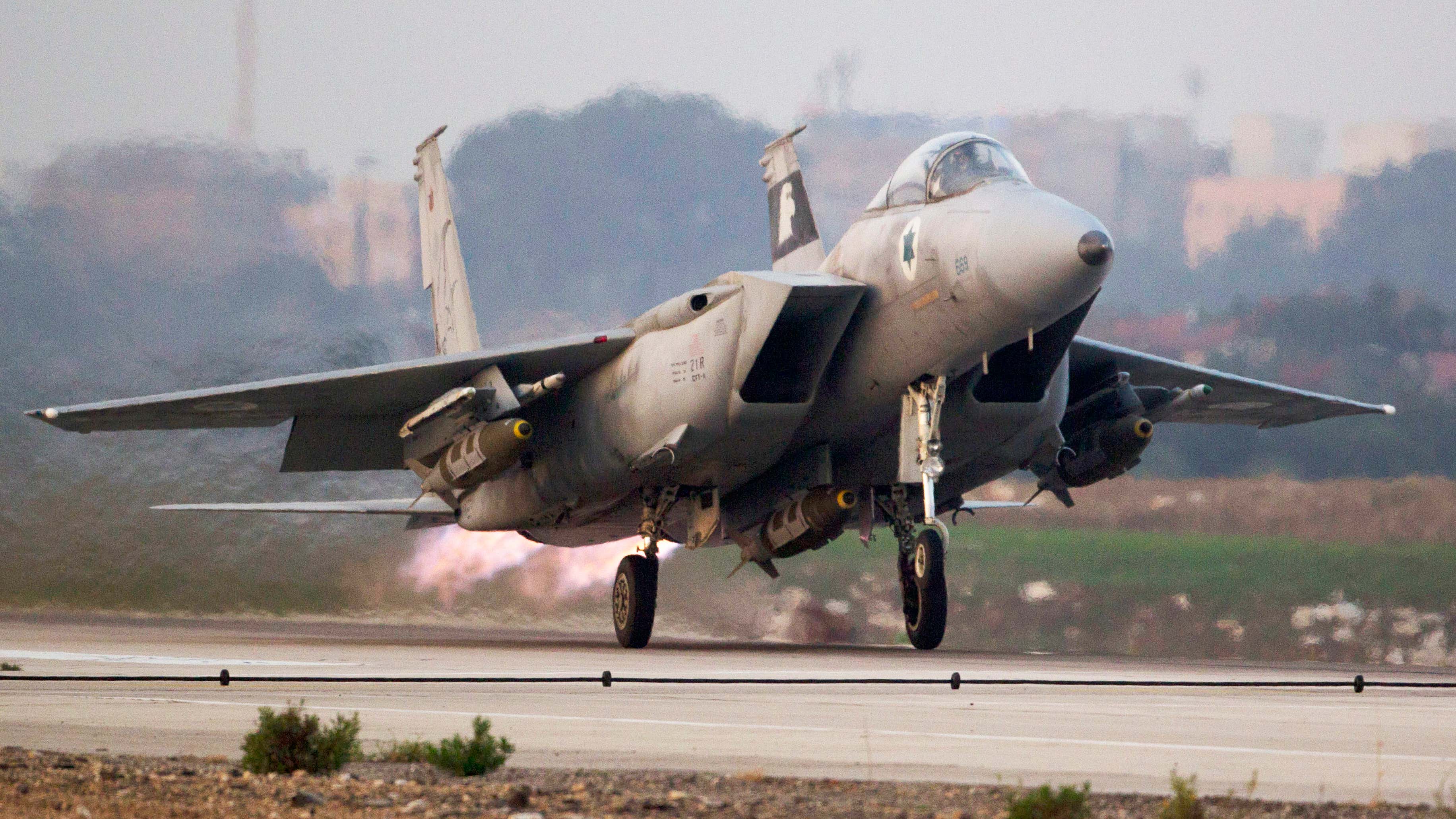 American B-52H bombers flew another global power failure from the United States to the Middle East and back, this time crossing Israeli airspace on their journey. During their time over Israel they were hit by a quartet of F-15A / B / C / D “Baz” (Falcon) fighters. Two of these planes appear to be armed with an interesting weapon configuration. Instead of the latest and greatest air-to-air missiles the IAF has to offer, they fly outdated missiles, and probably for good reason.

The history of the Israeli F-15A-D Eagles is very different from that of their American counterparts. Early on, the IAF adapted its most capable air superiority fighter to a long-range strike platform. Since then, the service has continued to transform the Baz fleet into something of its own. Today they are real multi-purpose aircraft, which the IAF treats as prices even many decades after the type was first put into service. You can read all about the Baz fleet’s fascinating past in my previous feature. Indeed, the IAF continues to receive used, widely used examples from the United States, carefully rebuild and upgrade them deeply into indispensable national resources, some of which are armed with the best networking capabilities of the armed forces.

So don’t think of these airplanes as their American cousins ​​think of not being a pound for air-to-ground operations. At the same time, they are still F-15A-D Eagles in their hearts, making them ruthlessly capable in the air-to-air space, and like the US, these aircraft are still vigilant to protect Israeli airspace.

The Baz is a true multi-purpose fighter: An Israeli Air Force F-15 takes off on November 19, 2012 from the Tel Nof Air Force base for a mission over the Gaza Strip in central Israel.

I believe the two armed bazs we see in these pictures are actually alert planes that included the B-52 air escort in their air patrol. This is just a guess, but given their load, it makes sense. They are armed with missiles and Elta-8222 electronic self-protection capsules, for the most part known to be the best of their kind in the world. Just ask the US attackers who fly with them on their enemy jets, or countries they have pinned on far inferior aircraft that with their help turn into something completely different. Here you can read all about this reality. 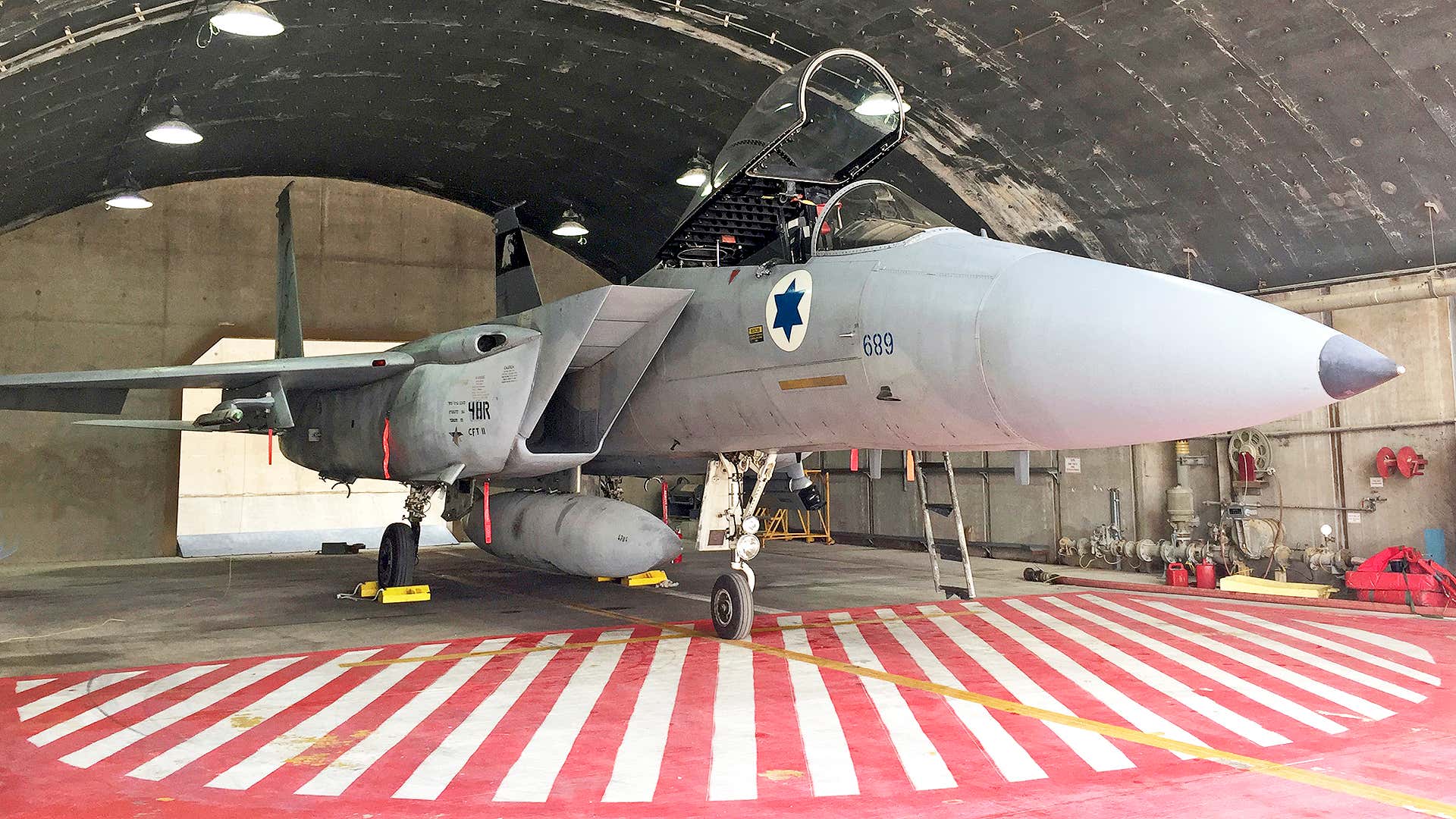 In another difference to the US F-15C / D Eagles, all Bazs fly without external fuel tanks. Instead, they carry compliant fuel tanks, also known as quick packs, which the IAF introduced early and which were retained as standard equipment long after part of the U.S. F-15C / D was discontinued. There has been an initiative in recent years to bring them back to the USAF F-15C / Ds, but that has been put on hold as the F-15C / D fleet is being replaced by the far superior F-15EX – an aircraft , that comes with compliant fuel tanks from the factory. This makes sense since Israel is a tiny country – it’s about the size of Vermont – but it’s in a turbulent area of ​​the world and has many enemies, including non-state actors with increasingly capable arsenals. So it doesn’t require a ton of gasoline, especially considering that the F-15 already benefits from a relatively long combat radius, and the fast packs offer more range without the big drawbacks of external tanks. 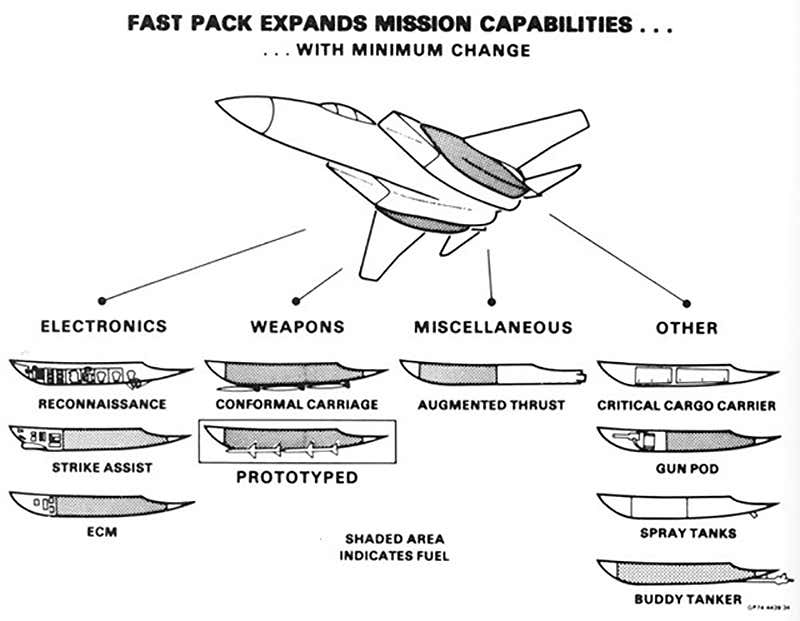 Early F-15 Quick Pack Concepts. The IAF ran with it decades ago and its use in the compliant fuel tank configuration enables very long range strike missions.

Most interesting of all are the Bazs’ rocket charges. Most notably, we see AIM-7 sparrows instead of AIM-120 ARAAMs mounted on their compliant fuel tanks. The semi-active radar homing Sparrow is still used by a dwindling number of air forces. For example, Egypt and Iraq have to use it with their advanced F-16s due to tough export restrictions. AIM-120 active radar homing is simply not an option. Even the US Navy still has some of them in its inventory, but the AIM-120 is far superior to its predecessor in almost every way – almost.

While the AIM-120 has superior range, is far more flexible overall, better enabling fighters to attack multiple targets at once, and has a true fire-and-forget ability, you can read all about the realities of those abilities here and here – The sparrow has a warhead that’s twice the size. While there are other aspects of a missile’s endgame performance that determine the destruction it can potentially wreak on a target, including endgame fusion, accuracy, and kinetic energy, the AIM-7 makes a much bigger bang. 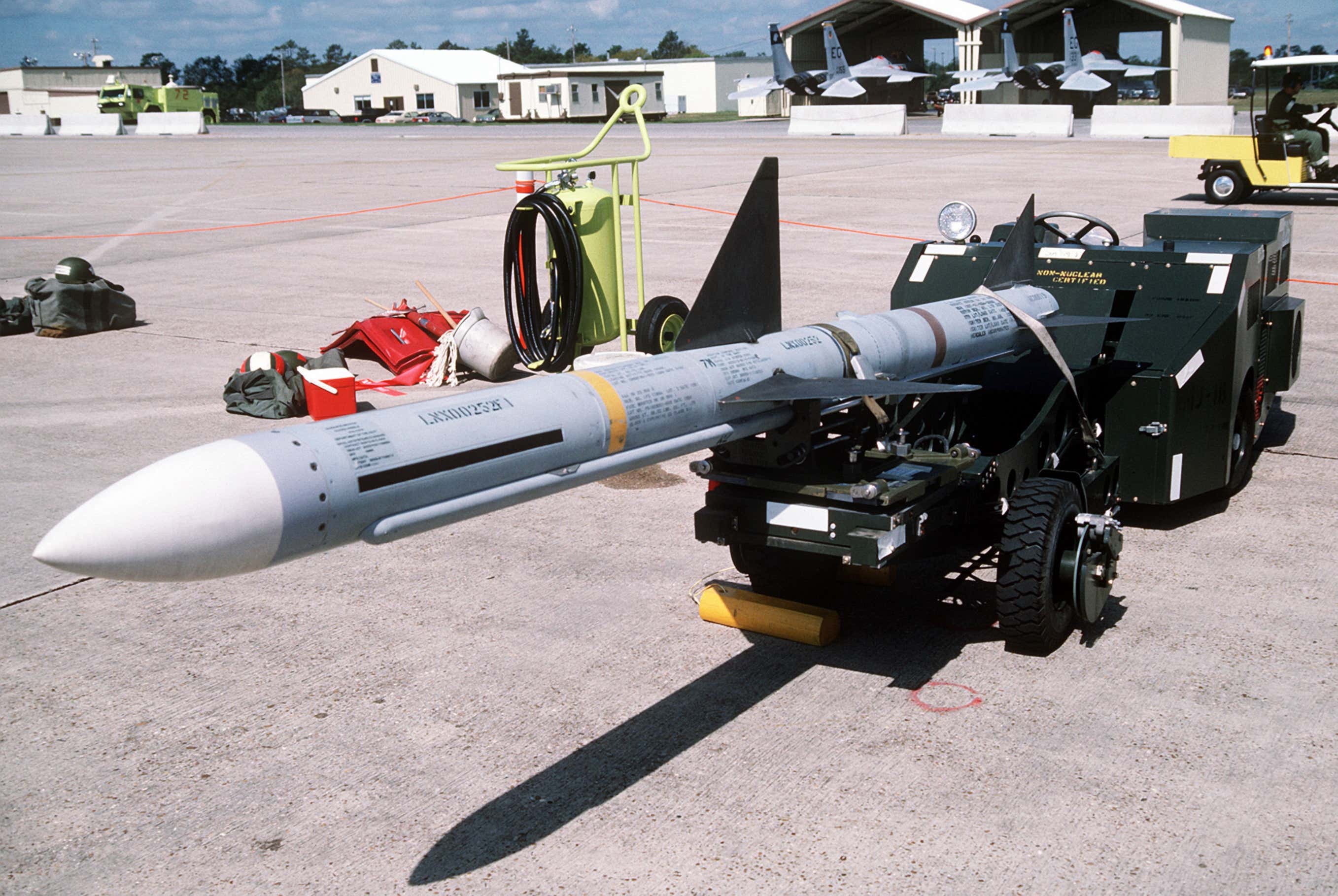 While we have never been given an actual explanation for this, there appear to be very unique circumstances in which the AIM-7 may even be preferred over the AIM-120. Again, these are very special situations with specific objectives and mission parameters, and we have been told in the past that they really do not relate to the vast majority of air-to-air combat. So we cannot say exactly what these circumstances are, but apparently they exist. 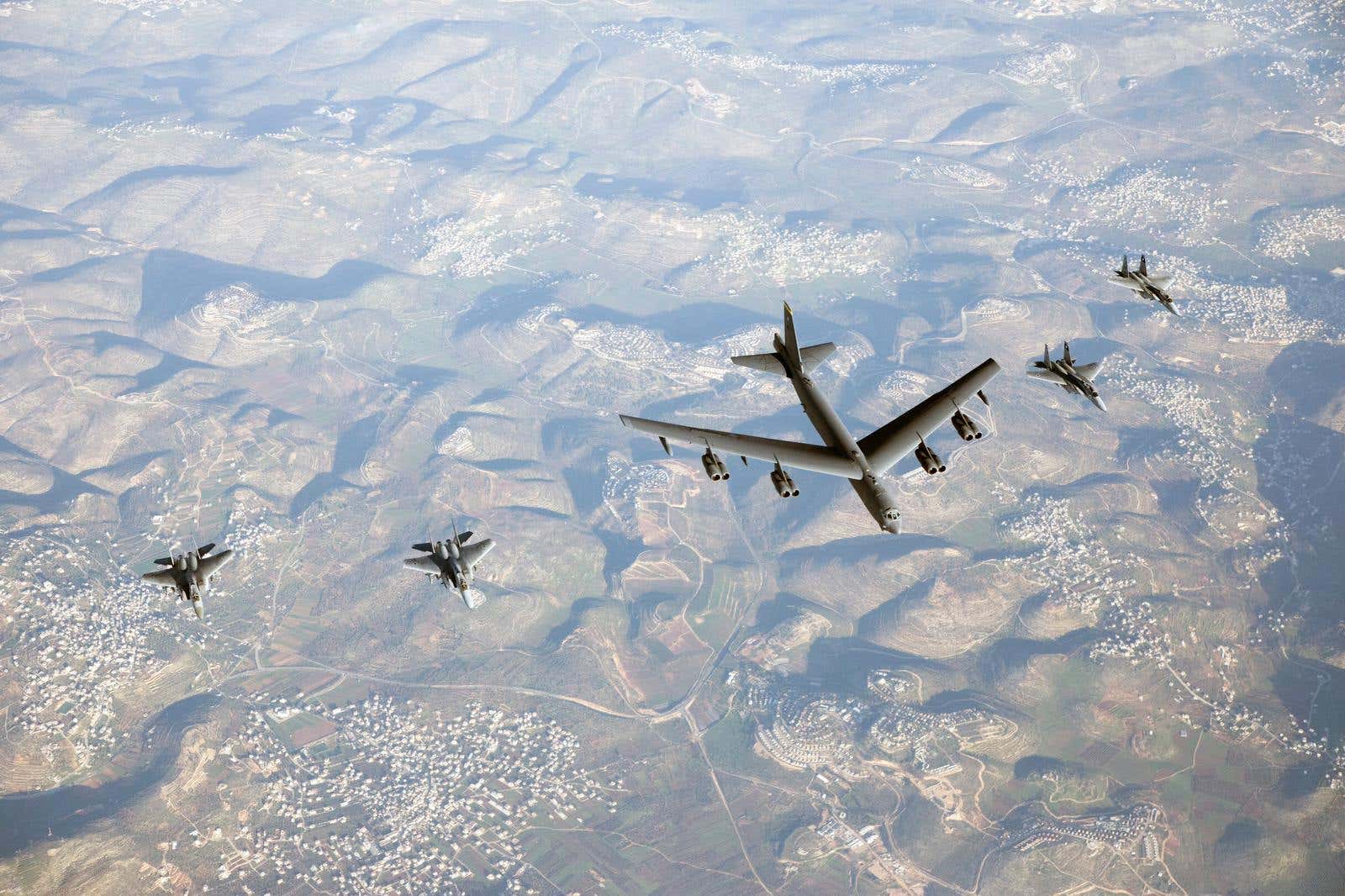 Regardless, the sparrow may be good enough for the home defense role. In peacetime, an air target out of sight is unlikely to be attacked. Prior to this, visual identification or other coherent intelligence would be required. For threats like cruise missiles, Israel has the most powerful multi-tier air defense system in the world, which a place like the United States lacks almost entirely (outside the Washington, DC area). When you factor this and Israel’s tiny geographic size, the capabilities of the AIM-120 really aren’t that critical. In addition, the larger warhead of the AIM-7 may be preferable for shooting down large targets such as hijacked planes or very small targets such as drones owned and used by Iran-backed Hezbollah. Semi-active homing, used by the Sparrow, where it picks up the reflected radar energy from the F-15’s powerful radar, can actually be beneficial for this type of engagement, we just don’t know.

Finally, we must address the possibility that the AIM-120 and IAF compliant fuel tanks may have equipment issues. It is certainly possible, but it seems unlikely. Newer compliant fuel tanks can easily accommodate the AIM-120, and historically Israel hardly allows such problems to determine the performance of its aircraft. You have the option of modifying these tanks – I think they make them locally – so that possibility seems a bit far-reaching, but we just don’t know. 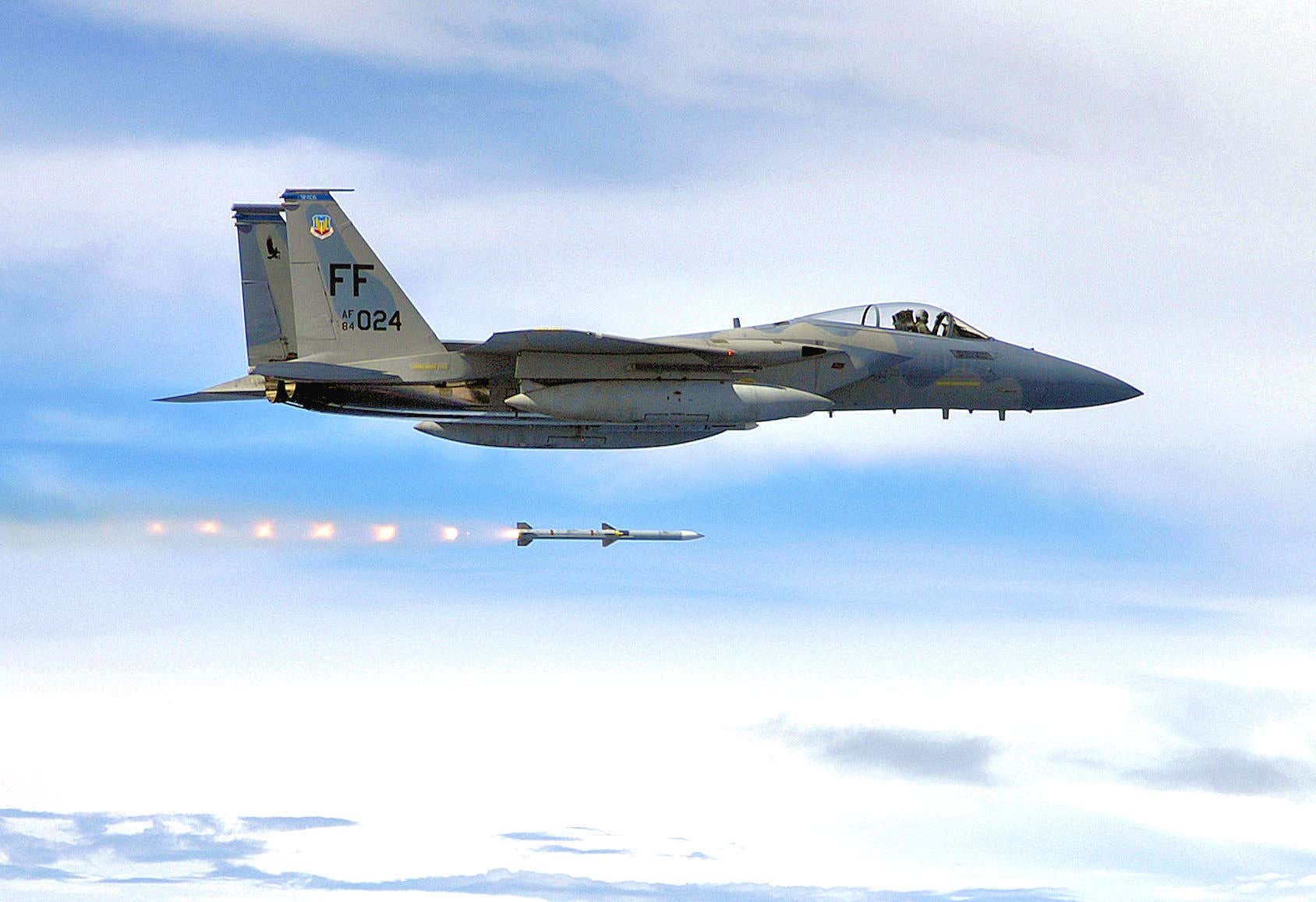 In addition, they are older missiles. Therefore, it may be preferable to increase flight time, especially if their capabilities are higher than required, rather than using newer stocks of AIM-120s for the mission, the latest of which cost over $ 1M each and would be for during a wartime period the IAF is vital.

The two bazs also carry older native Python 3 air-to-air short-range missiles as well as Python 4/5 missiles on their underwing stations. The rockets come from two generations, the Python 3 being very similar to the AIM-9L / M Sidewinder and the Python 4/5 being very similar to the AIM-9X. Both remain capable, but the Python 4/5 is far more advanced. Again, there may be some goals where the Python 3 offers very narrow advantages over its newer stablemates, especially in terms of infrared sensor technology and support for countermeasures. As mentioned earlier, drones pose a growing threat to Israeli airspace. They are difficult to engage, so either type of missile can give Baz pilots more flexibility. Again, it is important to maximize the flight time for old stocks. 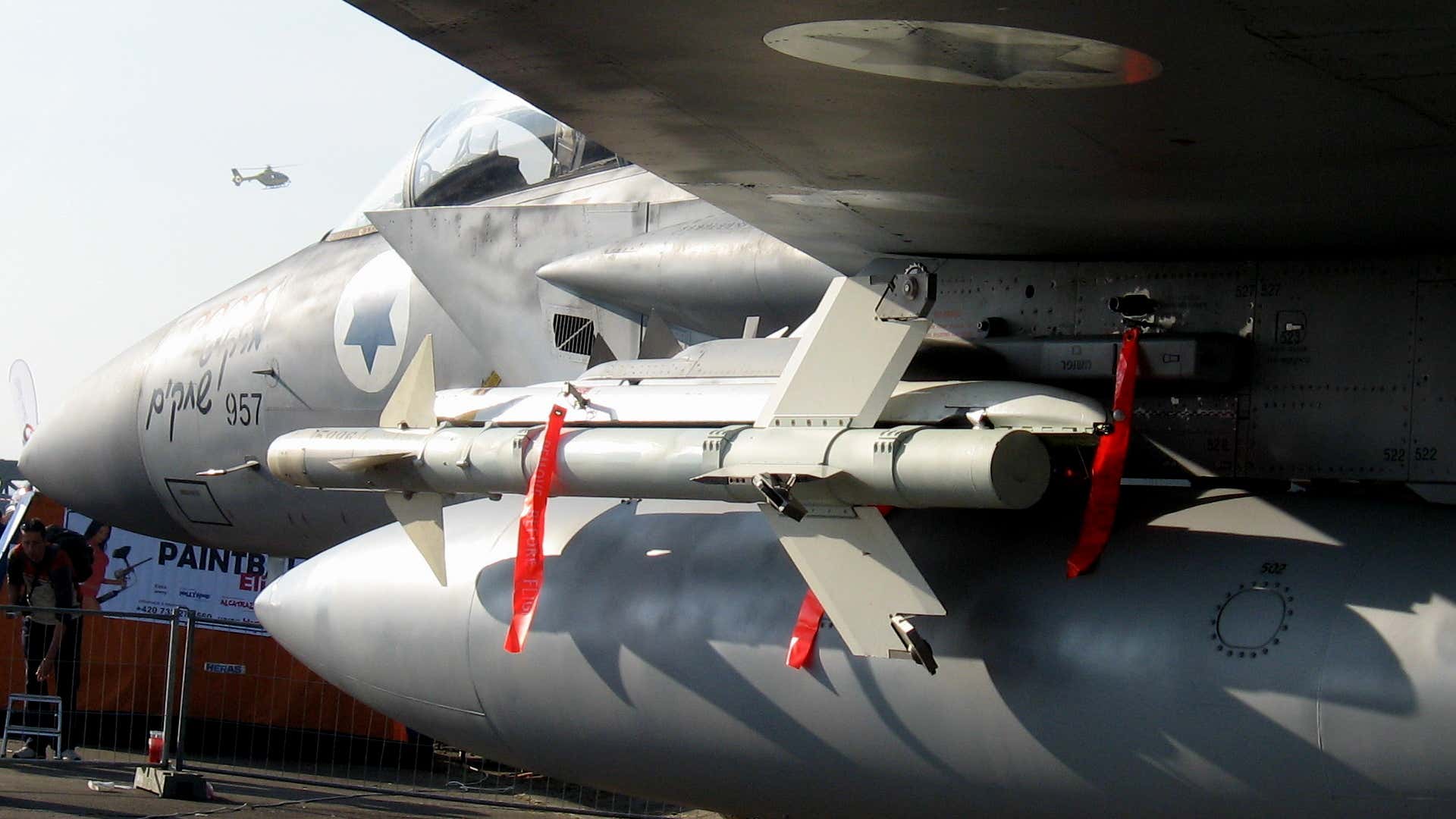 A Baz F-15D with a Python 3 captive training round. You can see the unique fin arrangement of a Python 4 on the other side of the rocket rail.

We don’t know what’s on the other side of the bazs in the picture. It is possible that their wing station could be of a different configuration and that an air-to-air missile would normally be mounted out of sight behind the interferer. This could very well be an AIM-120 that offers the best mix of what the IAF has to offer, all in one loadout.

If anything, these images are a reminder that Israel has its own way of doing things in military operations, and usually it is damned logical to border on brilliance. Regardless, it’s great to see the IAF’s bazs look as eclectic as possible and carry some old-school guns alongside an old-school American bomber.