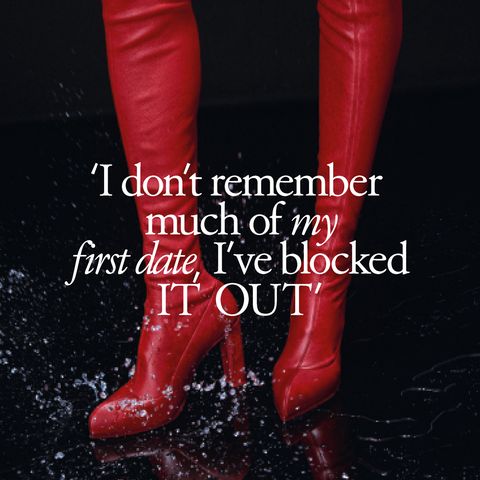 I am sitting in a “partial circle” on a Kundalini yoga class. Women and men around me take turns: some tell stories of love and loss; others just want to talk about their feelings; one is recovering from an eating disorder. When it is my turn I open my mouth, but no words come out. This may be a “safe space”, but I don’t think any of the yogis would be prepared for what I want to say: I am an escort.

I think you could say this is a cautionary story. No little girl grows up wanting to be a prostitute. I wanted to become a high-flying manager, but instead, at the age of 22, I found myself in bed with a stranger and having sex for money.

This life was never the plan. I was just 21 when I moved to London to work in recruiting, fresh from a comfortable middle-class country house. City life was exciting and I threw myself into my job, social life and dating before a series of events turned my world upside down. After a drunk lunch, I made the shameful decision to drive. I crashed into a wall and while no one else was injured, the stress of dealing with my actions, coupled with the police investigation, led me to get into a pretty dark place: I got shingles, I lost my job, and collapsed At the time, I turned to an ex-boyfriend of a footballer for support.

It was he who suggested I go as an escort. He and his pals had used them before, and the way he talked about them made it seem like fun and easy money – dressing up just for dinner dates in fancy restaurants. Call me naive, but then I didn’t even know it was about sex.

At my first meeting with an agency, the lady in charge didn’t mention that either – the true nature of the job was only explained to me during the photo shoot. Of course I was shocked, but money speaks. A combination of the promised £ 250 hourly rate and a huge dose of courage was enough for me to take the plunge. Just give it a try, I thought, and take things from there.

If my friends were suspicious of my new found job, they never mentioned anything. I haven’t told anyone. I was also hired by a more established London agency at the time, and I was staying in a fully paid townhouse in Paddington with about 10 other girls – I didn’t see anyone outside that bubble.

My first customer there was old, bald, and smelled like hot plastic. Chubby hands scratched my dress with their nails bitten off to the core. He lunged at me, sweaty and grunting until he came. I think he was a regular at an agency who was sent in a fun way to try out the new girl. I have passed the test.

The agency owners sent boxes of champagne into the house and we gulped them down to blur the reality. Drinking and working soon went hand in hand. But customers started complaining that girls showed up drunk and alcohol was banned. One of the Russian girls introduced us to cocaine.

Honestly, we needed it. I was never addicted, but I used it a lot in the early stages to get through the crazy hours. The agency made us work around the clock, it never stopped. I was sound asleep and customers would ring the doorbell to see me – Coke helped me get through.

After about a year of doing the job, I’d started meeting girls in different agencies and I realized how controlled and messed up my setup was. Also, instead of taking a 50% cut on each transaction – around £ 400 a night on average – these girls got 70% or even 80%.

I decided to go and try my luck elsewhere. And when I did that, it got ugly. The agency put me on a dummy website and sent the link to my family: to my mom and dad, my school friends … even my grandparents. It was terrible. Looking back, I don’t know how I dealt with the pain of being outed so brutally – I wanted to leave. My family was in shock, and I did my best to allay their fears by downplaying the truth. We never talked about it after that. At the time, I had my own regulars – some of whom just wanted company – and when I told them that sex wasn’t always an issue, I wasn’t lying.

At that point I was on the books of the best agencies and my price had gone up to £ 500 an hour and up to £ 2,500 for overnight stays. I was constantly on the go, from weekends and private parties to group trips to places like Cannes for the film festival.

Some guys just want company in their hotel, others want to show off in the clubs and look popular. I’ve met some really nice, interesting people and some very successful people. Often times, something is missing in customers’ lives and they come to you to find a room where they can just talk.

But while I was involved in a million different relationships, my relationship with myself – and my real friends – was massacred. I’ve lost a lot of confidence. When you play as someone else, that character becomes who you are, so to speak.

Although I had friends at work, relationships never lasted. To regain some power, I shifted the work from “hourly hours” to “arrangements”: a kind of untied relationship in which men paid me a monthly fee and I saw them accordingly – once a week or once a month, shall we say. It was a step closer to freedom, but I still desperately missed a normal life.

Then I was attacked in my apartment. I had just returned from a job in Brussels and taken a booking from an eloquent guy who kept calling. When he showed up, fuck the fan. I was beaten and strangled by him – and an accomplice who forced me to empty my safe and fled with all my money. I’m pretty sure it was through an agency or an organized gang because they knew exactly how much money I had in the house. Paranoid and alone, that was the wake up call I needed. Feeling unsafe in London, I moved to Qatar to start a new career in the fashion industry.

How I got back to London is a different story. But I’ve left my previous life behind; I have a partner and a young daughter and am now fully qualified as a Kundalini yoga teacher. My experiences still haunt me and the thought that my daughter will ever find out about my past turns my stomach.

I often feel like a hypocrite. So much of what I do is about being open and vulnerable, but I don’t talk about my past and I don’t think I could ever share my story with my students or any other yogis. Yes, I own crystals, wear loose white sheets, and drink matcha tea. But next time you roll your eyes at a yoga stereotype, remember, we too have a story.

If you have a story that you think would work for The Secret Lives of Women, please email secretlives@elleuk.com

This content is created and maintained by a third party provider and imported onto this page to help users provide their email addresses. You may find more information on this and similar content at piano.io