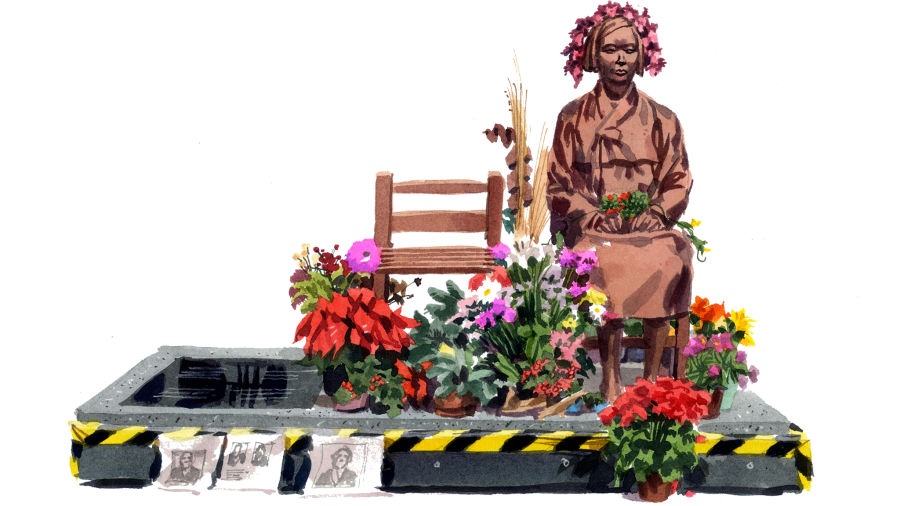 In February 2020, when Nataly Jung-Hwa Han, chairwoman of the Berlin Korea Society, received a one-year permit to install a bronze statue of a “comfort woman” – a WWII euphemism for the Japanese army – it seemed good to match the city.

The German capital seamlessly combines its multicultural present with its nightmare past. A remnant of the Berlin Wall, where Germans once shot Germans trying to flee from Germany to Germany, is now the East Side Gallery, a kilometer-long section with brightly painted murals. The city’s sidewalks glitter with an estimated 9,000 stumbling blocks or “stumbling blocks”, small brass signs that are placed in front of former homes of Holocaust victims. A statue of a “comfort woman,” Han suspected, offered the opportunity to improve diversity, condemn atrocities, and bring a poorly balanced relationship between the sexes into a male-dominated memorial landscape.

Han received approval to install the statue for one year from August 2020 to July 2021 on the corner of Bremer Strasse and Birkenstrasse in the green Moabit district. The mayor, Stephan von Dassel, even agreed to give a speech at the unveiling, Han said. Von Dassel, a member of the progressive Greens, rides a bicycle and regularly tweets his social conscience. Han was therefore surprised when he canceled his participation at the last minute. Another local official also refused, citing an illness.

Nevertheless, on Monday, September 28th, a large crowd gathered, mainly women from the city’s large Asian community, including – according to Hans – a handful of organic Germans or “biological Germans” on the corner in Moabit. A purple curtain was wiped away to reveal a five-foot statue of a young girl who was sitting in a chair, her hair cut, barefoot, her fists clenched and a “bird of peace” on her shoulder. A granite plaque commemorated the “countless girls and women from the Asia-Pacific region” who were lured or forced to perform sexual service by the Japanese military during World War II. It warned against “the repetition of such atrocities worldwide”. An adjoining bronze chair enabled passers-by to literally take the place of the young woman.

Since the first statue across from the Japanese embassy in Seoul, Tokyo has used an arsenal of diplomatic means to force the removal of “comfort women” statues

The next day, Japan’s Chief Cabinet Secretary Katsunobu Kato held a press conference in Tokyo. “We are aware of the unveiling of the statue in Berlin,” said Kato. He called it “a very unfortunate move” and said the Japanese government intends to “approach various parties involved in removing the statue”.

Japan’s Conservative government sees the statues of the “comfort women” badly. They are seen as the reification of a flawed historical narrative. Japanese right-wing revisionists claim that the women were not forced into sexual servitude by the Japanese military but were recruited as prostitutes by their compatriots. Japan views the statues as a political attack on its reputation rather than a commemoration of agreed historical facts.

The statues also mask Japan’s repeated apologies. In August 1993, then Chief Cabinet Secretary Yohei Kono expanded Japan’s “sincere apologies and remorse to all, regardless of place of origin, who, as comfort women, suffered immeasurable pain and incurable physical and psychological wounds.”

Since Kono’s landmark statement, the Japanese governments have wavered between deep regret and refusal to fire. Agreements were signed, compensation paid, apologies withdrawn. In March 2007, then Prime Minister Shinzo Abe sparked international outrage when he refused to use Japan’s sex slaves during the war. “There is no evidence that coercion existed,” Abe said, “nothing to support it.”

Since December 2011, when the first peace statue was erected opposite the Japanese embassy in Seoul on the occasion of the 1000th week of protest by former “comfort women”, Tokyo has used an arsenal of diplomatic weapons – political, economic, legal – to use violence to remove “comfort women” Statues. They have suspended diplomatic relations, canceled bilateral agreements and threatened economic reprisals. In 2017, an amicus curiae letter was presented to the US Supreme Court on behalf of Japan asking whether it was “constitutionally permissible” for Glendale, California, which erected a statue of peace, “the foreign policy of the United To disrupt states ”. . Beyond Korea and the USA, there are statues of “comfort women” in China, the Philippines, Taiwan, Hong Kong, Australia, Canada and now in Germany. It’s the diplomatic equivalent of “hit a mole”.

Tokyo’s latest attempt Putting Berlin under pressure is particularly cumbersome: a former imperialist power is pressing the successor government of a former fascist ally to erase memories of war atrocities. Even more unpleasant is the fact that, during its rotating presidency of the UN Security Council in April 2019, Germany successfully sponsored Security Council resolution 2467 “Combating Sexual Violence in Conflicts”. “With this resolution,” said Federal Foreign Minister Heiko Maas, “we are focusing on the victims and calling on all member states to enable them to live their lives with dignity.”

When a Japanese newspaper reported last fall that Tokyo’s Foreign Minister Toshimitsu Motegi had spoken to his German counterpart about the removal of the statue, the German Foreign Ministry refused to comment. A Berlin city official made it clear: “When the Senate’s office found out about the situation, talks were held with the Japanese embassy and the Mitte district office and a quick solution was decided.” Nataly Han’s one-year permit was revoked.

“The ‘Peace Statue’ and its memorial plaque,” said District Mayor von Dassel, “touch on a politically and historically complex dispute between two states in which Germany is not appropriate.” Von Dassel gave Han a week to remove the statue. Tokyo greeted the news with cautious optimism. “We see this as a positive step and will continue to monitor the situation,” said Kato.

The resignation sparked anger in Berlin. So-Yeon Schröder-Kim, the wife of the former German Chancellor Gerhard Schröder, is of Korean origin. She said: “German officials should not get involved in suppressing the efforts of independent civil society initiatives to recognize Japanese war crimes.” Nataly Han published an online petition. “Berlin must be a space in which remembrance work against sexual violence in war can develop freely,” she wrote. Han defended freedom of expression. She warned against “diplomatic pressure”. Their petition was signed by 3,454 supporters, many of whom were biodiverse. Another online petition from Ah-Hyun Angela Lee, a student in Frankfurt am Main, registered more than 8,000 signatures.

Last autumn, one day before the von Dassel move date, 300 demonstrators marched into his office. Von Dassel canceled his resignation. “We hope to find a compromise that will serve the interests of both the Korea Society and the Japanese,” he said. The Japanese embassy signaled that removal was the only option. When I called the German Foreign Ministry, I was simply told that the dispute was a communal matter that was outside the “competencies” of the Foreign Ministry.

Last December, the city council of Berlin’s Mitte district voted on the controversial installation. In a majority decision of 24 to 5, the council voted to keep the statue. Several councilors were reluctant to interfere in community affairs. It was called disreputable or highly inappropriate, even insulting.

When I visited the Statue of Peace in the midst of the argument, fresh flowers mingled with fallen autumn leaves. Three red carnations lay over the clenched fists. Copies of Nataly Han’s online petition, bright yellow in protective plastic, were taped onto the granite base. Someone had put earmuffs around the statue’s neck in anticipation of a long stay in Berlin.