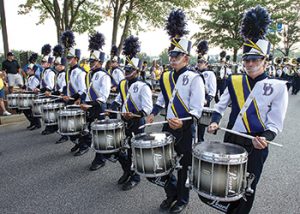 The University of Delaware Marching Band has been honored to accompany President-elect Joe Biden and Vice-President-elect Kamala Harris to the White House after taking office on Inauguration Day tomorrow, 3 CBS Philly reports.

“I didn’t know I was going to march in a historic presidential inauguration,” marching band drum major Eric Abner told CBS Philly. “It is a honor.”

Due to COVID-19 and safety concerns, the inauguration live audience will be limited to members of the 117th United States Congress, each allowed one additional guest, while the rest of the nation will watch virtually and on live television.

“I’m sure there will be a lot of people cheering us on at home,” said Abner, one of four drum majors performing on Wednesday. According to CBS Philly, about 45 members of the University of Delaware marching band will march alongside the Howard University drum line – Biden and Harris’ Alma Maters.