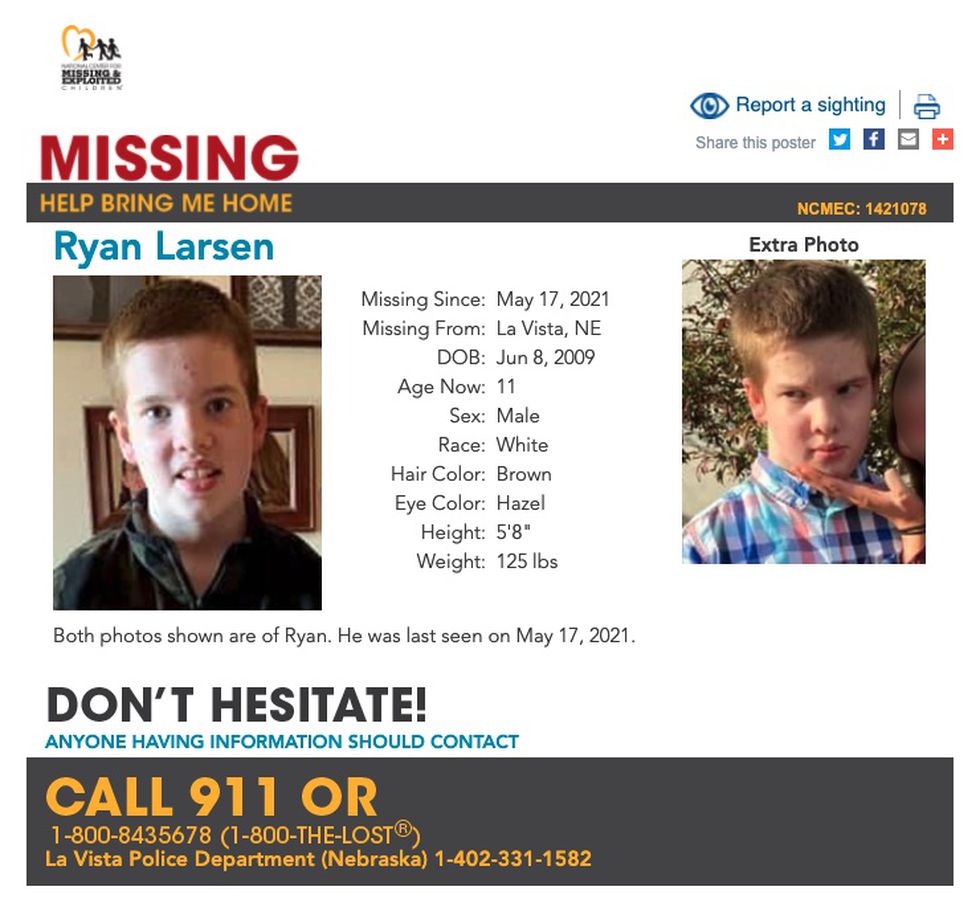 LA VISTA, Neb. (WOWT) – With Ryan Larsen’s family celebrating the boy’s 12th birthday on Tuesday without him, the La Vista police chief told 6 News that law enforcement continues to analyze all leads on the case.

“One of the things we go through is a lot of videos,” he said. “We had to get officers from different parts of our department to watch videos all day to see what’s in there.”

Today has been 22 days since Ryan Larsen disappeared from La Vista. Today is Ryan’s 12th birthday. I sat down with @lavistapolice boss Bob Lausten this afternoon to talk about the ongoing search and next steps. He says he’s never had a case like this. More on @ WOWT6News pic.twitter.com/XTuVZxJuVT

The police chief said most of La Vista companies voluntarily shared their surveillance videos, but in some cases investigators have been delayed while authorities work across divisions to get videos from some companies.

“One of the obstacles we have encountered is that some key places we need to watch videos of have built a legal stone wall with our divisions,” said Lausten. “So instead of voluntarily receiving videos of a few places we’d like to see, we had to go a subpoena route.”

Authorities also conducted mortuary dog ​​searches on some local bodies of water to no avail, he said, noting that crews have completed soil searches in the area, including several at Walnut Creek.

The LVPD is now investigating more closely for sex offenders in the area, Lausten said.

“We had a general idea when we started investigating sex offenders who lived in some proximity to Ryan’s house. We have expanded this proximity, ”he said. “So we’re going back to the history and whereabouts of some of our sex offenders in the Omaha area.”

Lausten said he never expected to reach day 22 of such a search.

“We thought that would be resolved on Monday evening: he ran away and there he is. But when you start out for that long, I think the idea of ​​’running away’ is probably not the best theory right now, ”he said.

The boss said he had about five theories but wasn’t sure what the best theory would be – and said none of them were specific.

“I’ve been here for over 30 years and this is the first case we’ve had with an endangered missing child who has been gone for so long,” said Lausten. “Some cases become outliers – family disputes or a family abducted the child. But we’ve never had anything like it: he’ll be here one day and he’s gone. “

LVPD is also in daily contact with the family, he said.

“We have contact with Ryan’s mother every day and again: We look at everything. We owe Ryan more than anyone else to find out where he is and what happened. “

What to do when you see Ryan

Ryan, a sixth grade student, was last seen leaving school on Monday. He is described as white, about 5 feet 8 inches tall, with brown hair and hazel eyes. At the time of his disappearance, he was wearing a black jacket, blue jeans, an Old Navy shirt, and a polka-dot umbrella.

When you see Ryan, the authorities say not to reveal his name; Instead, keep your distance and call 911. Anyone with information on their location should call Sarpy County Crimestoppers at 402-592-STOP (7867); or call 911. The LVPD also urges the public to use their See It, Say It, Send It app to share tips, but also to “consider unfounded rumors that are circulating about the case.”

Monday May 17: La Vista police call for help from the community to find Ryan Larsen, an 11-year-old La Vista boy with autism who was last seen at noon that day while entering La West Elementary School left. A neighbor of the apartment complex where his family lives later reports that they saw Ryan there shortly after graduating from high school. The Nebraska State Patrol issues Ryan an emergency warning.

Tuesday May 18: LVPD responds to two possible sightings of Ryan, including one near the La Vista library.

Wednesday May 19: LVPD seeks federal assistance in finding Ryan. The FBI and FEMA are implicated.

Thursday May 20: LVPD sets up police tape around Walnut Creek Lake in Papillion to prevent groups from gathering there as authorities concentrate their search for Ryan there. In a press conference that evening, Police Chief Bob Lausten urged the public not to speculate or share rumors, as doing more harm than good.

Friday May 21: La Vista police revealed that K9 units picked up some sort of odor in the Walnut Creek Recreation Area, but according to Lausten, authorities are looking elsewhere as well. The Nebraska State Patrol said in a press conference that the emergency warning regarding Ryan would expire because it has been in place for 72 hours. Local, state, and federal agencies will continue to assist with the search.

Saturday May 22nd: LVPD announced 6 News that the resort area would be closed for another day as teams continue to search for Ryan. 6 News sees crews from Bennington, Waterloo, and Yutan arriving along Turkey Road to help locate them. The National Center for Missing and Exploited Children website features a “missing” poster by Ryan. LVPD later reveals that the Papio Natural Resources District began sinking Walnut Creek Lake around 7:00 p.m.

Monday, May 24th: In a press conference, Chief Lausten said K9 officers had given three pieces of information. The boss notes that they may have ingested an animal or human odor or something, and says several dogs have been spotted in the same area – “a Friday, a Saturday and a (Monday)” – so the search is focused on those northeast end of Walnut Creek. Divers can enter this area, but Ryan is not found.

Tuesday May 25: Authorities have no new information about the search, but said they believe the Walnut Creek Recreation Area has been thoroughly searched.

Wednesday May 26: La Vista police say they are focusing their searches on surveillance videos, particularly one from La Vista Keno, which tapes the day Ryan was last seen. LVPD is asking businesses and homeowners along Harrison Street, between 72nd and 96th Streets, to check their security records and notify police if they see “a sign from Ryan.”

Thursday May 27: La Vista police reported no new developments Thursday as they continued their search for Ryan. They also asked that the family’s privacy be respected. “We update them regularly in our search for Ryan, and they are understandably fearful and concerned. Please understand your decision regarding public comments or their lack of them. “

Friday May 28th: ​​La Vista police held a press conference and mentioned that they would continue their searches in different areas next week. The police are still working with the FBI, the Omaha Police, the Sarpy County Sheriff’s Office, and the Nebraska State Patrol. “They are anchors who help with manpower, personnel and resources.”

Monday May 31: LVPD says half of 40 officers are assigned to Ryan’s case, but officers are also weighing business calls during the search. Captain DJ Barcal told 6-News: “We still have an obligation to the citizens to enforce all laws and take care of their needs.”

Wednesday June 2: LVPD said authorities are reviewing information gathered during the previous day’s door-to-door search in hopes of developing potential new information or clues. Surveillance video sent to Quantico for improvement; Chief Lausten says Ryan’s mother believes it is him in the recording.

Sunday June 6: As authorities move into the third week since eleven-year-old Ryan Larsen went missing, the search for the La Vista boy remains largely centered in the Walnut Creek Recreation Area, a place he is familiar with.