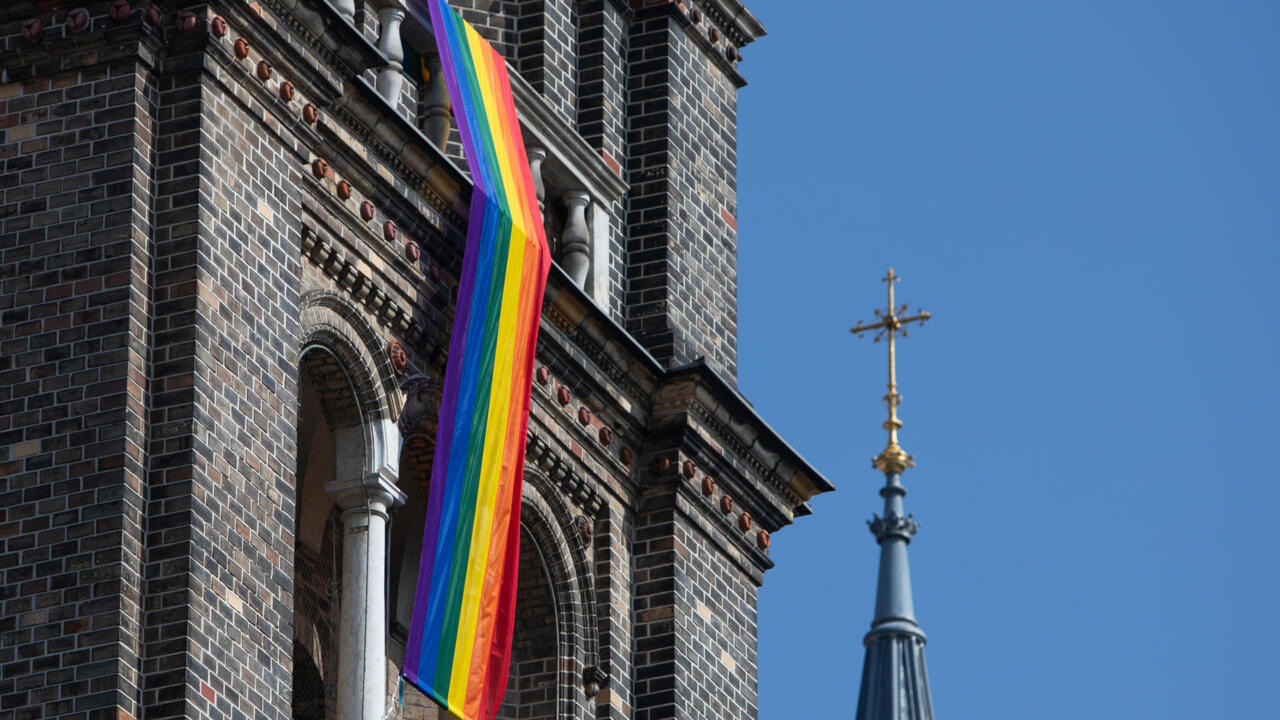 Hard Parish Catholic Church is one of many in Austria that decided to hoist the rainbow flag in solidarity with the LGBT community after the Vatican ruled last month that the Church could not bless same-sex partnerships.

The powerful Vatican office responsible for defending church doctrine, the Congregation for the Doctrine of the Faith (CDF), has ruled that same-sex unions, despite their “positive elements”, cannot be blessed.

The bureau wrote that while God “never ceases to bless each of His pilgrims in this world … He does not and cannot bless sin”.

Hard’s Pastor Erich Baldauf says he and the hundreds of other clergymen who belong to the reform-oriented “Priesters Initiative” movement have decided to hoist the flag to show that “we disagree with this outdated position,” including with make the gesture to many other churches.

Shortly after the rainbow flag was set up in Hard, attempts were made to damage it and, last Tuesday, Baldauf sadly discovered that it had been burned.

“We were shocked … it hurts us,” said Baldauf.

Although the perpetrator was not caught and there is no proven motive, Baldauf notes that other flags flying in the same location were never attacked.

In the following days, another rainbow flag was burned in front of a church, also in the far west of Vorarlberg, while a third was stolen.

In the following days, two more rainbow flags were burned, which were hanging in front of churches, also in the far west of Vorarlberg.

Contrary to the impression that these incidents might create, surveys show that Austrian public opinion is firmly on the side of equal treatment for same-sex couples.

Same-sex marriages have been legal in Austria since 2019. A poll last week found that 64 percent of Austrians were against the Vatican’s latest decision.

Only 13 percent said they could understand the Vatican’s stance.

Austria is still a predominantly Catholic country. In a country of 8.8 million, the church has almost five million followers.

However, this is a sharp decrease from the decades after the war, when almost 90 percent of Austrians belonged to the Church.

Experts say differences between Austria’s social attitudes and the Church’s teaching on issues such as homosexuality and abortion contribute to tens of thousands leaving the Church each year.

It is not just the explicitly reform-oriented priestly initiative that has commented on the CDF ruling.

No less a figure than the Archbishop of Vienna, Cardinal Christoph Schönborn, said he was “not happy” with the Vatican’s declaration.

“The message that went through the media to the whole world was a simple no and indeed a no to the blessing, which hurts many people to the core,” he told the Catholic newspaper Der Sonntag.

Toni Faber, the priest of the famous St. Stephen’s Cathedral in Vienna, was even more open.

“If my job was to do the most damage to the Church with two pages of text, I would be writing exactly the kind of letter that the Congregation for the Doctrine of the Faith wrote,” he told news magazine Profil.

The CDF’s statement “totally failed” with the aim of “upholding the sacrament of marriage,” said Faber, adding that none of the heterosexual couples he marries “feel affected by the fact that I am blessing same-sex couples “.

The misfortune found an echo among the German Catholics. Priests using a hashtag are calling for “disobedience” online.

While some prominent German bishops have supported the Vatican’s stance, others accused the CDF of suppressing theological debates that have been waged among German Catholics in recent years.

A German petition calling for the CDF’s decision to be ignored was signed by 2,600 priests and deacons and 277 theologians.

The reaction in Germany and Austria speaks for broader global fault lines in social issues between socially conservative and liberal communities.

According to the Jesuit priest and former head of the German section of the Vatican Radio, Bernd Hagenkord, the German-speaking countries also have “a very special tradition of theology that acts very independently” and cannot be overridden by the church hierarchy.

Back in Hard, the parish church decided to leave the remains of the burned flag in place for a few days after the attack.

“It had the effect of a cross,” says Baldauf.

Just in time for Good Friday, a new rainbow flag proudly waved again in front of the church, a sign of welcome for all parishioners at Easter.